The caring and experienced professionals at Kimzey Funeral Home are here to support you through this difficult time.  We offer a range of personalized services to suit your family’s wishes and requirements.  You can count on us to help you plan a personal, lasting tribute to your loved one.  And we’ll carefully guide you through the many decisions that must be made during this challenging time.

You are welcome to call us at any time of the day, any day of the week, for immediate assistance.  Or, visit our funeral home in person at your convenience.  We also provide a wealth of information here on our web site so you can learn more from the privacy of your own home.

Founded at the turn of the 20th century as the George Taylor Undertaking Company, the funeral home originally existed as a store front operation on North Main St. in Mt. Pleasant, just a block south of our current location. The funeral home was purchased by Dan Cookes in 1916.

In 1935, Dan moved the establishment to the corner of Main and Henry Streets into the stately Sergeant/Worthington Home, one of the history "3 Sisters" houses of Mt. Pleasant. Following Dan's death in 1948, his wife Nellie sold the funeral home to Al Lunning, who operated it as the Lunning-Cookes Funeral Home.

In the future, Mark intends to maintain the warmth, charm and character the home in response to the many people who enter the funeral home and admire its craftsmanship and beauty. 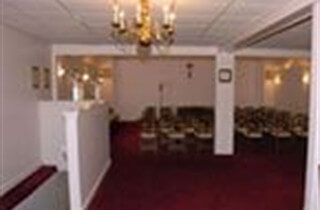